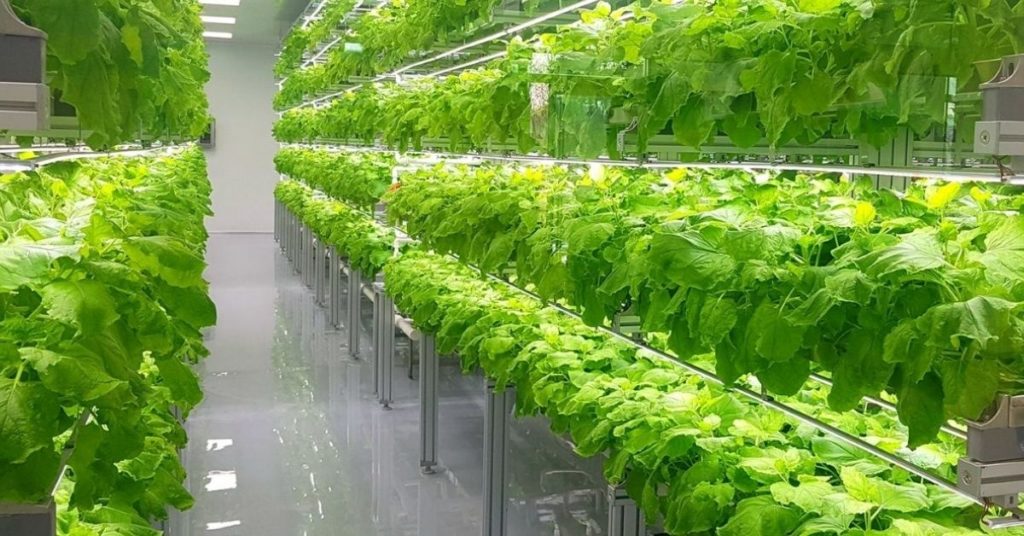 With the rapid urbanisation of our world, indoor vertical farming has quickly become a popular alternative to traditional farming. Since its conception, it has given farmers the ability to reap higher yields of better quality in much smaller spaces. As the global food supply chain experiences setbacks in food production and is faced with problems of food wastage, purposeful vertical farming could alleviate our collective burden by personalising nutritious harvests.

What is vertical farming?

Vertical farming is the practice of growing plants in vertically stacked layers in indoor spaces. These spaces include greenhouses, warehouses, and even abandoned mines and shipping containers. It is a type of urban agriculture as farming often takes place in urban areas such as cities and towns.

Typically, vertical farming is done without using soil, and popular farming methods include Hydroponics, Aeroponics, and Aquaponics. These involve the use of water, air, and aquatic animals such as fish.

Why is vertical farming on the rise?

The rise of vertical farming is directly correlated with the rapid urbanisation worldwide and increasing demands for fresh food production.

The British Nutrition Review has estimated that over 85% of the global population does not consume enough fruits and vegetables. This shocking lack of intake is characterised by various factors, such as limited food variety and low food quality.

The root of the problem lies in the inaccessibility of fresh produce due to the uneven distribution of harvests, and vertical farming is on the rise as a sustainable alternative to traditional farming due to its various unique characteristics and benefits.

Ability to grow in small spaces

Vertical farming does not require much space as plants are stacked on top of each other in towers or layers and grown indoors.

Traditional farming on a large scale typically requires acres of land. With the rapid urbanisation of areas on the fringes of cities and towns, farmers are having a more and more difficult time finding an available space.

Complete control of the growing environment

In vertical farming, growing takes place indoors and relies on artificially manufactured environments. Farmers can then take the initiative to optimise the growing conditions of crops to obtain the highest and most nutritious yields.

Crops in traditional farming, however, are entirely subject to natural weather conditions. Harsh conditions can make it difficult for plants to thrive, while extreme conditions such as droughts, storms, and flash floods can destroy farmlands.

In traditional farming, much of the water meant for crops is wasted through various channels, such as being run off or evaporating, disappearing before even reaching plant roots.

Plants that are grown hydroponically can recycle water through their systems over and over, so there is no need to add fresh water constantly. This way, vertical farmers can use up to 98% less water to produce the same yield.

All the above points cumulate to one major benefit — personalised harvests.

Ultimately, vertical farming is excellent because it offers farmers flexibility in terms of food production. Namely, farmers get to decide what type of crop and how much they would like to grow, in the exact ways they can be grown.

One of the biggest ways to personalise harvests is through controlling the farm climate with temperature sensors, regulators, and LED grow lights. This allows farmers to grow specific seasonal crops regardless of the temperature outside.

What are LED grow lights?

LED grow lights are luminaires that use LED technology to produce artificial light for growing plants. LEDs are a popular choice in urban agriculture processes because of their compact size, long lifespans, low heat emissions, and the wide range of colours they come in, including red, green, blue, and various shades of white.

Ability to grow crops regardless of seasonality

With the combined efforts of temperature regulators and LED grow lights, vertical farmers can create their own desired indoor farm climate. This means they can replicate seasonal characteristics to grow specific crops depending on local and international consumer demands.

All crops have their unique growing seasons. For example, peas, lettuce, and spinach are ‘cool-season crops’ planted in the cooler months of the year. On the other hand, beans, peppers, and cucumbers are ‘warm-season crops’, and their seeds are sown in the warmer months.

With personalised harvests, farmers can also create higher crop output by replicating 10 to 14 ‘seasons’ a year.

If the demand for a warm-season crop is particularly high in the middle of winter, vertical farmers can increase the temperature of their farm to mimic springtime weather.

The cycles of light and darkness plants receive significantly impact their development, from how they grow to whether they will bloom and flower.

Indeed, vertical farming harvests can be more nutritious than those of traditional farming methods when growing conditions are optimised.

Research conducted by Wageningen University has shown that tomatoes respond differently to various intensities of light. Tomato clusters suspended near modules of LED grow lights for 13 days contained up to twice as much Vitamin C as those of the same species that did not receive the extra light.

Vertical farmers that use hydroponics or aeroponics to cultivate their plants can also use digital sensors to monitor the levels of nutrients in the water funnelled or misted to the plants so that plant needs can be met.

Additionally, as vertical farming takes place indoors, crops are much less vulnerable to pests, reducing the need for farmers to use pesticides and other chemicals on their plants that can be harmful if consumed.

How to reduce food wastage with vertical farming

According to the Food and Agriculture Organisation (FAO), high- and low-income countries throw away about 650 million tonnes of food each annually.

Vertical farming can reduce food wastage by shortening the harvest supply chain and planting and harvesting only according to demand.

In traditional commercial farming, crops are usually grown to be delivered and supplied nationally and internationally.

Harvested plants immediately begin to lose flavour, tenderness, and nutritional value, and long international supply chains present many opportunities for crops to be discarded at any stage during harvesting, shipping, packaging, and delivery.

Vertical farming does not require a large amount of space and thus can serve local communities to shorten supply chains. This can decrease the likelihood of crops spoiling before even reaching consumers, which will reduce food wastage.

Firstly, farmers over-plant to make up for potential plant loss from adverse weather conditions. This is a good plan when faced with the ever-growing demands of fresh produce. However, favourable weather conditions can then lead to a surplus of crops harvested.

Secondly, farmers over-plant to satisfy the high standards of first-world retailers and consumers who are prone to reject fresh produce that does not meet aesthetic standards. When fruits and vegetables do not look ‘perfect’, they are discarded immediately after harvest. This is difficult for farmers in low-income countries with limited harvesting technology.

Vertical farmers do not have to over-plant to make up for potential adverse weather conditions. With the farms situated in urban areas, farmers can also focus on optimising plant growth elements with the help of temperature sensors and LED grow lights to ensure that crops will thrive. At the same time, we as consumers can educate ourselves in overcoming aesthetic biases.

Harvesting only according to demand

Finally, in traditional farming, crops are often harvested in large quantities without careful consideration of global demands simply because new batches of seeds must be sown in time for the next season.

Vertical farming can combat this issue with its ability to personalise harvests and produce all types of crops in all seasons.

Without an imminent need for immediate harvest as soon as crops are ready, farmers who farm for their personal needs can harvest right before consumption and only take what they need. Farmers who grow for local distribution can, over time, gain an estimate of how much they usually sell and harvest accordingly. If they end up with a surplus of unsold vegetables, they can also give them away to local communities in need.

Vertical farming as a step closer to solving world hunger

We all have a part to play to reduce food wastage in our daily lives. Individual consumers can grocery-shop conscientiously and not purchase more than we need, and communities can consider more sustainable crop production methods such as vertical farming.

LED iBond is a contributor to the four United Nations Global Goals, and we are committed to reducing food wastage through our innovative LED lights for vertical farming. For more information on how to build your own vertical farm with our LED solutions, please contact Henrik Fabricius, VP Sales, Vertical Farming, at (+45) 8161 7810 or via email at hfa@ledibond.com.